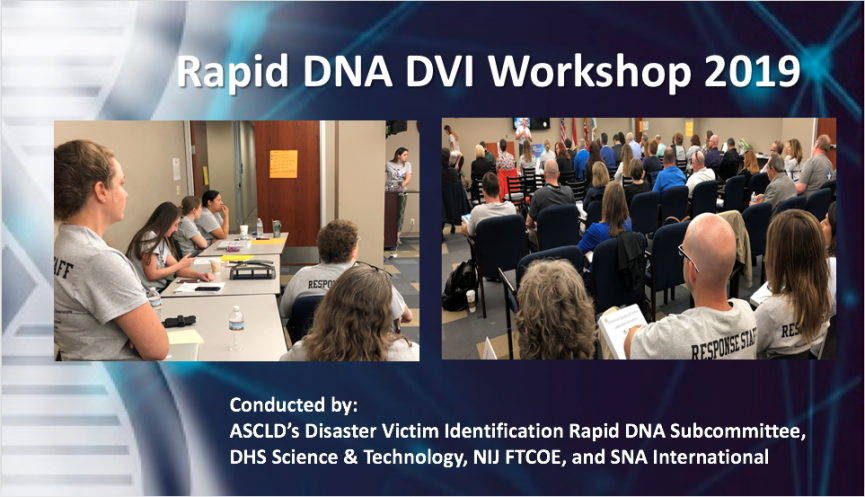 On May 19, 2019, ASCLD hosted a Rapid DNA Disaster Victim Identification (DVI) Workshop.  There were 43 participants and an equal number of resource staff, which included many local, state and federal agencies with DVI expertise.  The day began with presentations from experts on policy and included information on many disasters including DVI, most recently experience from the California Camp Fire disaster.  Following presentations, participants were presented with a mock disaster at a local factory, with included potential victims from the local neighborhood, factory employees, visiting international staff and a group of touring school children.  A table top exercise followed, where groups planned a response including Rapid DNA used to identify disaster victims.

After each group completed their 7 stations, which included a mobile response unit, there was a hot wash of the exercise, including development of lessons learned.  These lessons learned included the variation and unpredictable nature of disaster incidents; recognizing expertise that exists and the legislated, non-legislated and medico-legal components of a response; coordinating and cooperating with the many stakeholders including local and remote resources; use of practical responses and preparation as structure is easily lost in a dynamic incident; not forgetting the human element of families and responders; and finally that planning, policies and role playing for use of Rapid DNA and other tools are needed. A recap of the workshop and lessons learned were included in the presentation given in the plenary session on May 23rd.  Special thanks to DNA, RTI, St. Louis PD, Missouri DMORT and DHS for their support and expertise in planning and hosting this exciting and valuable workshop.